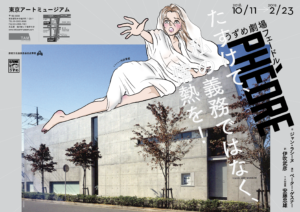 【story】
Queen Phèdre of Athens, ancient Greece, is the son of his ex-wife and falls in love with Ipolit, who is much younger than herself.
France’s most famous classic tragedy masterpiece that pierces the human heart. A stage that reveals the tragic nature of women in society, which is unique to the Uzume Theater.

-Director’s message-
I like Heiner Müller’s comments on the tragedy.
You can get the power to live by watching the human sinked of sadness.
That become the purpose of help me., so I can look to misery.

“Phedre” is a work with a mythical motif.

Myths doesn’t get old. It ’s a way of looking at humans.There is something right in any era.. However, you have to be aware of what is correct in your time. You need to discover something new. I tried it for that.

The pamphlet for “Phedre” at Deutsches Theater in Berlin says:
“This book is a monolith.”
This museum called TAM, where theatrical performances are held for the first time today, is a bit like a monolith. There is no mistake.

By the way, we are going to do this “Phedre” outdoors next summer. Raise a torch on the beach in Kitakyushu, the hometown of the Masuha Uzume Theater. When Obon, It’s isn’t bad the Goshikizuka Tumulus in Kobe and the stone stage of Asuka Tumulus too.

Let me say thank you. To all who helped with this stage play.
Actually, 11 years ago, I participated in the project to create the overall image of Ando Street as the artistic director of Sengawa Theater. It’s a very good memory.
When Sengawa Theater has been launched, I am proud of the work done by menbers at Uzume Theater. The effort and time spent was great.

Now we are in TAM. Probably my most favorite place on this street. Please bring your love not only today but also to enjoy the museum.

Peter Goessner wrote at the October 2018 in performance pamphlet