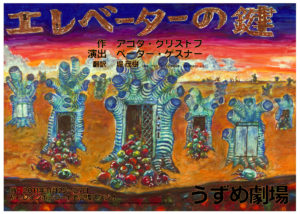 During the Prepare of this performance (July 2011), the author, Agota Christoph, died.
From the bottom of my heart, I commend Agota Christoph for his achievements.

When Agota Christoph was twenties,she was exiled to Switzerland with her husband in the wake of the Hungarian Revolution , taking a suckling baby. She made a living while working at a watch factory, but it seems that her exiled companions returned to their hometown knowing that they would commit suicide or be detained one after another. Neuchâtel in Switzerland is a French-speaking country, and she writes novels and plays, calling French a hostile language. “Le Grand Cahier” became a bestseller and was recognized as a writer. “Le Grand Cahier” is a story about twin brothers, but it is said that it is modeled on Agoda and his older brother. However, Agoda never returned to his hometown of Hungary to meet her immediate family.