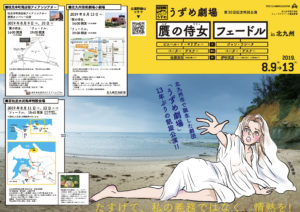 -Director’s message-
“Phedre” is a married woman who loves young men.
France’s most famous classic tragedy, a story based on Greek mythology.
The appearance of a person trapped in a net of love expressing a stronger passion than anyone else is somehow far from the present age, and I wonder what kind of magic it is. Nevertheless, the characters in our work look like people of the same generation. (I thought: there were few queens in the past, today we are all little queens and princes …)

On the other hand, “Phedre” remains as a classical play that emphasizes human beauty and tragedy. It would be nice to see such an art drama from time to time. Mariva, who wrote “Fake Handmaiden” describes what is called “emotional traffic congestion,” but the modern world is more than that. A classic that has been sharpened like “Phedre” will make you feel like washing your heart.・

It can be said that “Fake Handmaiden” marks the beginning of modern behavior in modern society (comedy format). If you look at both works, you can see that the behavior is reversed. There is nothing worse than lieying in Phèdre, but it is used as a tactical weapon in the Fake Handmaiden.

Mariva was accused of showing low etiquette, but in the first place he incorporated people’s dialogues into his creations while eavesdropping on the streets. I don’t think that people’s dialogue on the street is worthless compared to artistically created dialogue. The artistic strength of dialogue does not necessarily depend on hierarchy. Triblanc and Arlequin are witty and their hearts are kind and warm. (Manami Goto directs and teaches the Manzai scene and Triblanc.)

I have one more thing to say. I lived in Kitakyushu city from 1993 to 2006. I really thank so many people that loved me and supported me . I want to give back with a theatrical work, In the best performance I can express.

Peter Goessner wrote in performance pamphlet at the August 2019