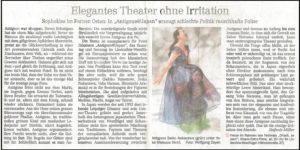 “Antigone”, which premiered at the “Shizuoka Spring Arts Festival” in 2005, was performed at the Theater Festival in Leipzig, Germany. It was featured in local newspapers and online programs on TV stations and became a hot topic.