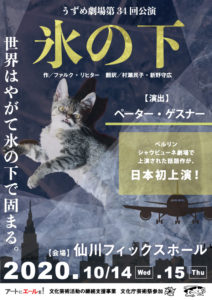 This work premiered in 2004 in Schaubühne, Germany. The drama, written when the experience of former businessman writer Richter and the influence of 9/11 still remains in the world,This time, it was premiered against the backdrop of the current situation in Japan, which is dominated by new globalism.

Uzume Theater was planning to perform “Phedre” at the International Theater Festival in Shanghai in October this year, but due to the influence of Corona, the theater festival has been postponed indefinitely.

We live in a special era. When people are frightened and society is shaking, I think that in times of social difficulty, theater people should exist instead of going underground. It may be due to my experience in 1989. At that time, I had some basic experiences in my theatrical life.

In April 2020, the Uzume Theater responded immediately after being forced to cancel the rehearsal for the Sibiu International Theater Festival. We have no time couldn’t perform to feel sorry for missing doing the  performance at this famous European festival. In June, we held three online premierees, as well as doing things we hadn’t planned or done before, such as the Uzume Art Award. There were talks about fear, about Corona, about the future, and about work safety. Do you still need theater? And I decided to do the Falk Richter text that Mr. Niino sent me many years ago.

Working in a relatively short rehearsal time was hard for everyone, especially for the actors. Then, I will deliver the result.Take care of your health!!

Peter Goessner wrote at the October 2020 in performance pamphlet